Factors to consider an automated disinfection system for ultrasound probes

In this episode, Mr Emmanuel Berenger discusses the decision to switch to automated high-level disinfection of ultrasound probes from a UVC device to a sonicated hydrogen peroxide mist system.

The mist devices were introduced initially in the obstetrics & gynecology department, followed by the emergency rooms and now there are several devices in use in this hospital.

As a Biomedical Engineer with responsibility for medical imaging, radiotherapy ane anaesthesia, Emmanuel shares his experience, thoughts and consideration for making this decision. 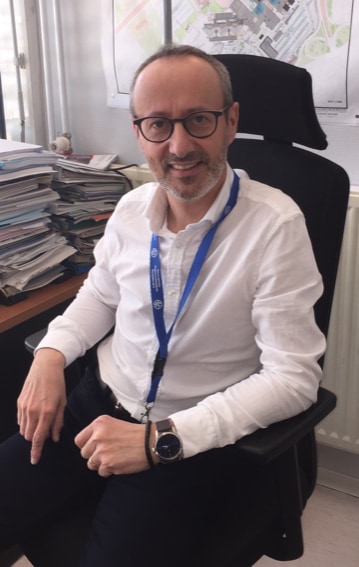 Mr. Emmanuel Berenger is a biomedical engineer, with responsibility for medical imaging, radiotherapy and anesthesia in a well-known university hospital.

Hello Mr. Berenger, could you please introduce yourself?


Hello. Let me introduce myself, I am Emmanuel Berenger. I am a biomedical engineer in a university hospital. I am in charge of the medical imaging, radiotherapy and anesthesia-intensive care sectors.


Thank you. In the field of ultrasound, your hospital has observed changes in hygiene practices. What elements have set in motion a project on this hygiene factor?


Effectively, we had a reflection in 2018 from a learned society conference. The supervisor of the gynecology-obstetrics department, on returning from this congress, alerted us to the future recommendations that were going to be published on the level of disinfection of probes, particularly in obstetrics gynecology (for what concerned us, but not only), by soliciting us, to acquire, for our next acquisitions our next medical equipment plan, supplemental probe disinfection systems. We were already working with a supplier at the time, we already had two devices, and she wanted us to think about extending the system to the obstetrics department.


So you were already equipped. How were the probes reprocessed before the implementation of these processes based on hydrogen peroxide mist?


Like many at the time, we used manual peracetic acid soaking reprocessing systems, and/or wipes.  And then we also had two automated systems already in 2018, so by UV, in two somewhat special departments, an assisted reproduction department and in gynecology at the consultations.


Why was it decided to implement another process? What were the factors and motivations for this change?


When this new need to expand these automated probe disinfection systems was expressed, a number of devices, which was arbitrarily defined, in this case four devices, were included in our medical equipment plan for the following year, in this case 2019, spread over different departments of the Department of Gynecology-Obstetrics.  This request was supported by the head of the division at the time and presented to the Medical Equipment Commission, which accepted the request. We have included in the medical equipment plan as of 2019, four new devices for the gynecology-obstetrics department. And so, in early 2019, we had to address this issue to be able to acquire these systems. And so there, we made the choice to go to competition and not necessarily to choose the devices that we already had in the two departments I mentioned.
To do this, we set up a small working group which was composed, of course, of users, of the Biomedical Department, and we also associated a hygienist to this project. So, we started a technology watch and we selected two suppliers, a supplier who proposed a device with UV technology and a supplier who proposed a solution with the use of hydrogen peroxide. Tests were made and an evaluation after the tests was, how shall we say, approached with a final choice which was therefore the choice of the trophon.


That’s good, so automation and traceability were major criteria, since the finalists both met these criteria. Did efficiency come into play afterwards?


Absolutely. Before making the pre-selection of the suppliers we were going to evaluate, the specifications included traceability, availability of devices and disinfection techniques. There it is. Then maybe the next question I’ll be asked is why. Why the choice of trophon?


So already, of a functional order. Initially, the expressed need. Where's my memory? Excuse me, of the need, but I’m talking about four machines. We would have liked, for example, we have six consultation rooms in gynecology-consultation, the department would have liked to be able to put one per room. Reasonably, it was not possible to consider the acquisition of six machines in the first year, so we limited ourselves to four and distributed them among different departments. So from memory, at the time, two were assigned to the gynecological consultations and then two were assigned to the emergency room. In the choice, the trophon, then not that, the choice fell on the trophon compared to what we knew before introducing the trophon (the machines we knew) in terms of compactness. The trophon presents a much more compact machine, with the possibility of either fixing it to the wall or making it mobile and so we, the idea (so, again, the choice was not only on this criterion, of course.  We assessed the ability to disinfect – that was the hygienist’s job), everything was assessed. But already, the fact that it is compact convinced us, because it allowed us, in particular in the gynecologist consultations, to be able to use it simultaneously in several rooms, where we needed it.


OK. Very good. So the device today fits perfectly into the workflow of these different sites.


Absolutely. So, it bothers me a little bit to say this, but if you take the competitor’s product (which has changed since then), it’s much more, in quotes, so I don’t know if that’s the term, “pleasant” to have a little box like the trophon in a gynecologist’s room where there’s already an ultrasound machine, an examination table, a desk than if you had imagined putting the competitor’s product in the same room.
A product that is much more imposing. It sounds anecdotal, but here we are, in an environment where, as I often say, we are not dealing with patients. It is not sick people who come to see us in gynecology-obstetrics.
They are expectant women who come for an examination. If the environment around can be much more pleasant...


This is important. Therefore, everything that is quality, for the patient, is important to you and therefore this decision is for the benefit of your patients.


OK.  Indeed, in terms of traceability, so today you have traceability on all these devices?


Absolutely. We use paper traceability. These devices normally have the capacity to be connected to a software package, memory, to be able to do electronic traceability. To date, I know it has been discussed within the department, but it hasn’t been started.


Do you have any recommendations for people who are still wondering about integrating this type of machine?


I encourage them to do what we have done in all transparency, to take stock of the devices that exist on the market, and then to evaluate these devices and make a final choice that meets the needs of both the administration or users, and then the patients.


So finally, how many machines do you have in the hospital today?


My facility currently has 7 trophons. So, in the gynecology-obstetrics department. I insist because they were not acquired..., they were acquired in three financial years: four devices in 2018, two devices in 2020 and then, finally, one last one this year, in 2021, which arrived 15 days ago.  I got it wrong, three weeks ago.


Indeed. To conclude this exchange, can you give me three major advantages of this automated disinfection device?


The first is already, I think, for the users. A saving of time for users, first of all, associated safety for the users, in the meaning that they do not have to be confronted any more with toxic products.
So, incidentally, the trophon does use hydrogen peroxide and sometimes, when I was able to talk to some people outside of my establishment, I understood that the products used by the trophon are not in contact with the users.


They are built into the device. It’s completely transparent. I insist.  The second advantage I would say is the traceability. Today, we still have a paper, but the device produces a traceability system that assures the staff and the expectant woman that the probe is clean. And finally, on the "home" side, at the level of biomedical probes, we have noted, a durability of the probes. That is, we realize that since we are using less soaking solution and disinfection by wipe, our probes last longer in time.


Okay, very good. Thank you, Mr. Berenger, for your feedback and your very precise explanations.

Choose your country and language

You are currently visiting nanosonics.co.uk, would you like to visit your regional site?

All countries and languages